If you read the first part of our best metal concerts  countdown you’l notice things are a bit different from other sites. With so many shows, we enlisted some help from RÖÄRGH and Minotaur’s Redemption guitarists Birdman Dan and Lyon. Without further ado, we continue to go against the grain with this roundtable discussion.
Chris’s #4: King Parrot and Child Bite at St.Vitus
Chris: Here I also interviewed both bands. Some of my favorite humans.
Anthony: King Parrot is a lot of fun live. I saw them open for Superjoint Ritual last year.
Chris: So funny and Shawn Knight from Child Bite not only has a cool name that rhymes with his band name but hes also extremely intelligent.
Anthony: Nice. Parrot is hilarious.
Chris: It was there that i noticed the 1988 painting of Donald Trump with the world in his hands in the basement. Youngy mooned it and I took a picture. I have no idea why he even bothers wearing clothes. As soon as I saw the painting I said to Youngy “If he becomes president then this might be proof that time travel exists.”

Birdman’s #4: Diamond Head at the Chance.
Anthony: Oh God, yes. That show ruled.
Birdman: I love how they stuck to songs form the metal records instead of the wanna be prog-rock records.
Anthony: Agreed. Almost the whole debut was played.
Birdman: I’ll bet if Metallica didn’t make “Am I Evil” famous, their “legacy” would’ve been “Sucking My Love.”
Lyon: Bands recognizing their good shit is important. I’ll segue that in like 30 mins.
Birdman: If I ever start a Vinyl collection I’ll grab lightning to the nations before I grab the Iron Maiden debut.
Anthony: I could see that sounding great on analog.
Birdman: They have a great new frontman as well and it was awesome getting a pic with Brian, who I interviewed earlier this year.
Anthony: He seemed like a pretty chill dude.
Lyon: When was that show?
Anthony: November 19th. Two days before the both of us went back for Carcass.

Tony’s #4:  Belephegor, Shining and Origin at the Gramercy Theater

Lyon: Sick. I saw Belphegor a few years ago – fun show.
Birdman: Did Niklas cut himself during Shining’s set?
Anthony: Very fun night. All of those bands ruled live and it was cool to see my friends Coco and Herb who I rarely see. As for Niklas cutting himself, no he didn’t but it didn’t bother me because they sounded great. He did do some goofy improv live too. For a psycho Niklas seems nice. He was hanging out with fans at the bar and letting people get pics with him. He remembered my interview with him where he talks about making a Christmas album. He then sang Christmas carols to me.
Lyon: Live shenanigans are like half the reason to go to a show.
Anthony: Yeah but music is most important. Anyone who hates their set just because he didn’t cut himself isn’t a real fan to me.
Lyon: Oh, for sure music is #1. I was mostly referring to whatever goofy live improv you mentioned.
Birdman: They’re especially not a fan if they didn’t like their set because he cut himself lol.
Anthony: Belephegor stole the show though. They are just a heavy choking machine live, and of course, Origin is always great.
Lyon’s #4: Dead City Crown, Necromancing the Stone, Allagaeon, Battlecross at Dingbatz
Lyon: It’s not because we’ve played there before – DCC, Necromancing and Battlecross all put on blisteringly raw and fun sets.
Birdman: Anthony did you hear the Necromancing the Stone record that came out this year?
Anthony: No I haven’t.
Birdman: It’s got James Malone from Arsis shredding it up.
Anthony: I saw it has him and members of Black Dahlia Murder and The Absence so I’m sure I’ll like it.
Lyon: Allagaeon basically didn’t play because of band mates having to go home on family emergency, but the rest of the show slayed. I knew Battlecross was gonna be fun (third time seeing them), but Necromancing really blew me away.
Birdman: What you basically witnessed is how hard the band will actually work in times of pressure, Allegaeon I mean.
Lyon:Yeah – it’s nuts they even played three song with no drummer and a failing backtrack.
Birdman: Including the Rush cover
Anthony: Which song did they cover?
Birdman: Subdivisions.
Lyon: It’s actually my favorite Rush song.
Birdman: It was how rob and I used to play RÖÄRGH shows, except Allegaeon put up a picture of a stick figure.
Lyon: They kinda lost it at the end, but for the most part it was sweet.The dudes from ‘cross were as nice as ever, too. The show just had a real “we are all here for the metals” vibe.
Birdman: I made it rain in Allegaeons tip jar twice, I had to. And the singer gave me a hug each time.

Editor’s Note: In the wacky world of publishing, some stories don’t see the light of day. Whether they sit on the backburner until they become irrelevant, positions change hands or they just plain get cut, it’s just one of those things. Today, one of those unpublished articles will finally get its due as we traverse the archives of “The Vault.”

When Superjoint (formerly known as Superjoint Ritual) got booked only 40 minutes from me I was pretty curious. I’ve been a fan of Phil Anselmo’s work for many years and while I don’t like Superjoint as much as Down, Pantera, Viking Crown or Necrophagia; I do find Superjoint to be a fun project and way better then The Illegals. When I got to the venue I bought a ticket off of Kurt from Blast Furnace (the show’s local opener). After talking to a bunch of fellow metalheads at the door, they finally opened up and the show began.

First band on was Middletowns own Blast Furnace, who play really heavy old school death metal. Being from the area, I’d seen them play several times before and they are always a fun watch. Blast Furnace is definitely a band from middle to upper New York worth checking out.

Next up was one of several Housecore Records artists (including the headliner) Fulgoria. As mentioned in my Maryland Deathfest 2015 article, this band plays some sort of sludgy death metal. Album-wise I’m not a huge fan of the band but just like MDF they performed well.

Around this time the show started getting crowded. Because of this,the venue opened up the balcony. Child Bite plays some kind of weird post-hardcore. The set was mostly boring except when they covered “My War,” my favorite Black Flag song.

I have always heard hype about this band. Even at the show my friends Cheyenne, Mercedes and Ray all talked about how excited they were to see them and how over-the-top they are. Throughout the whole set vocalist Matt “Youngy” Young was wearing nothing but pants that were too big for him and shoes. This caused his ass to be seen during the whole set (not making this up). He would also spray the audience with water over and over. King Parrot played a mix of thrash, sludge and grindcore with vocals that were just high pitched squawks. These guys were the second best band of the night (the first seems obvious).

It was finally time to see the main act of the night. Superjoint’s sound is a little hard to describe. They play very short thrashy songs with sludgy riffs. This is mainly because Anselmo hates the use of subgenres – something he mentioned at the show. I was stoaked when he praised Blast Furnace and laughed when he bashed MetalSucks.

Superjoints energy was intense. They had a great set playing classics like “Fuck Your Enemy,””Dress like a Target” and “Ozena.” They also randomly covered “My Sharona” by The Knack. Sadly no Pantera songs were played but seeing Superjoint was good enough on its own… so good it made a random guy shit his pants (seriously). 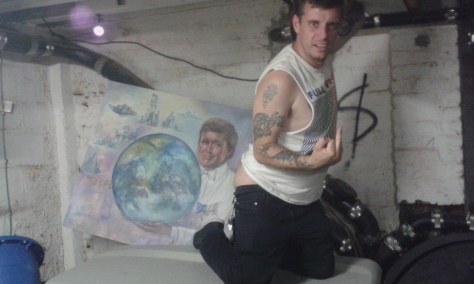 When one finds a band that sells a t-shirt bearing the words “I’m not here to fuck spiders,” it’s safe to say they have no idea what they’re in for.

That band is King Parrot; a destructive grindcore act from the hardcore pubs of southern Australia who is bestowing their sophomore album entitled “Dead Set” on Pantera and Down’s legendary front man Phil Anselmo’s (who also produced the release) Housecore Records.

The album kicks off with “Anthem of the Advanced Sinner.” If you’re familiar with King Parrot’s music the difference in production is night and day compared to their first album “Bite Your Head Off.” The clarity of each individual member is striking and it goes to show what a difference a larger budget and ample amounts of time can make.

“Dead Set” progresses deeper into darkness with “Need No Saviour,” “Hell Comes Your Way” and “Like a Rat,” boasting speed and relentless grind with true precision and technicality. The plunge then goes further with “Tomorrow Turns to Blood” and “Home is Where the Gutter is” when the grind becomes blackened and sludgy. The songs slowly start to accumulate grooves in all the right places, twisting King Parrot into form.

“Sick in the Head” and “Punisher” shake things up a bit by starting with thrash laden riffs before taking some groove oriented turns at Albuquerque. One of the best things about King Parrot is that their music is all over the place, never sticking to the same formula twice. We could be looking at the first “progressive grindcore” band – if ever there could be such a thing.

Although every musician has bolstered their repertoire on Dead Set, no one has improved more than vocalist Matt “Youngy” Young. Youngy’s voice has gotten significantly higher (which he attributes to quitting cigarettes) and more ferocious at that. Whereas Youngy sonically was a bit more like Steve “Zetro” Souza (Exodus) on “Bite Your Head Off,” he’s much more in the vein of Tomas Lindberg (At the Gates, Lock Up) on “Dead Set.”

The final two songs “Reject” and the title track combine everything that King Parrot have done so far on “Dead Set” and then crank it up a few notches for good measure. The title track not only revolves around a blackened breakdown, but it also clocks in at six minutes and 49 seconds; the longest song King Parrot has ever recorded to date.

King Parrot continues to be unpredictable with “Dead Set” and have clearly gone a long way from playing locally to tens of people. With the added experience from the success of “Bite Your Head Off,” the band has musically matured for the better and it shows on every crevice of “Dead Set”.

After all, they’re not here to fuck spiders.