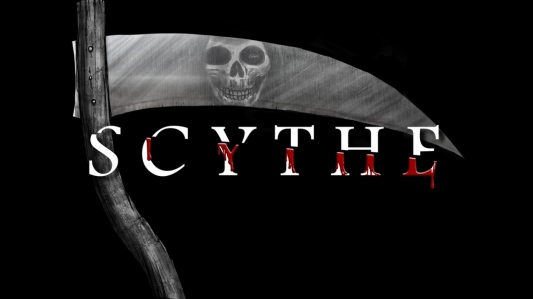 This year’s lineup of films were “The Warriors,” “Halloween 2,” “Friday the 13th Part 2,” “Demonoid,” “Stunt Rock”  and a mystery movie. This showing was also going to have two theater rooms instead of one, making it not sell out as fast as others.

I drove to the South Hill mall, arriving about a half hour before the first film started and ran into some friends. We went over to the vendor tables where the merch was pretty cool; ranging from horror shirts, Blu-Rays and DVDs from Vinegar Syndrome, horror signs made by Rob Sinclair of the Orange Ulster Horror Club to metal and punk records. I ended up buying  a VHS copy of “Demons” as well as a Blu-Ray of “Madman.”

I went into this film knowing nothing other then it being considered “fun crap.” As a fan of “fun crap,” I was pretty eager to see this.

“Demonoid” is about a married couple who explore a mine in Mexico and find a mummified hand in a coffin.  They take the hand home and while they are sleeping, the hand tries to possess the wife.The husband stops it from doing so but ends up getting his right hand possessed in the process.   He eventually dies and the hand goes from person to person until the widow teams up with a priest  to try to stop The Devils Hand.

The film is very poorly made, but in a way that makes it a hell of a good time to watch. The Nonsense story, poor acting, awkward dialogue, over the top scenes and unfitting pop songs that play at the most random parts all make up the films charm.

The Australian “Stunt Rock” is about real-life stunt man Grant Page (played by himself) who reunites with his cousin who plays Satan in the stage shows for a rock band called Sorcery (who also played themselves).

Their stage shows consists of special effects and magic tricks as Merlin and Satan fighting each other while the band plays.There was also a story with a female reporter falling in love with Page but was uninteresting and boring.

For the most part I found the film to be pretty boring. The stunts and the concert footage scenes were pretty fun to watch but everything else was uninteresting. Socery’s sound was pretty cool, reminding me a bit of older Alice Cooper with some Led Zepplin and Black Sabbath influences thrown it. I might want to pick up a Sorcery album when I have the chance.

After “Stunt Rock” came the mystery movie. I can’t tell what the film is but I will mention it was a film I had wanted to see for awhile and ended up being really good. Hint: the lead actor plays the President on a popular tv show now.

After that great mystery film it was time for “Halloween 2.” I hadn’t seen this installment to the saga in years so I was pretty excited.

“Halloween 2” is pretty much a continuation of the first movie with more violence, a more OP Micheal Myers, a more dedicated Dr. Loomis and Laurie Strode barley able to walk the whole film. “Halloween 2” is my third favorite in the franchise right behind the first and third films. After “Halloween 2” I headed home. As awesome as “Friday the 13th Part 2” and “The Warriors” are, I had stuff I needed to do at home.  Maybe next time I will stay for the whole show as it was a great experience.

Halloween is just around the corner and you know what that means…everyone is in the mood for horror (you know something to watch while sipping your pumpkin spice coffee).

Here are some films that need to become staples of Halloween horror along with the classics (the ones that are public domain will have a link to watch instead of a trailer).

The most recent film on this list is about a deaf mute woman who is killed by a gang of rednecks. Her boyfriend goes looking for her only to be kidnapped by the same group. Little do these onion-towners know that she has been brought back to life by Native American magic and is out for revenge.

The film feels like a throwback to movies such as “I Spit on Your Grave” and “Thriller: a Cruel Picture” but is nowhere near as explicit. “Avenged” is more like “Kill Bill” fused with supernatural horror and one of the more original recent horror films.

The most bizarre film on this list is a Spanish film done in the style of Italian films. “Anguish” is about a man who is brainwashed to kill by his telepathic mother and is also actually a movie that two teenage girls are seeing in a theater. Events in the real world start mirroring whats going on in the movie. The film is full of symbolism and is very unpredictable in the best way.

Film critic Roger Ebert barely ever likes horror films but he loved this one. The movie is about a bookstore clerk who discovers a really good book called “I, Madman.” While she reads the book the murderer somehow comes into the real world. The film fuses slasher with weird Twilight Zone-ish horror and does it very well.

Kathy travels to Indonesia in order to learn more about dark magic. She ends up meeting a witch who transforms her into a floating head that goes around drinking blood and eating unborn babies (not making this up).

This is just the tip of the iceberg as this film is one of a kind, managing to be weird and over the top yet pretty well made at the same time.

“Vampyr” is a French/German horror film directed by Danish director Carl Theodor Dreyer. A traveler who is obsessed with the occult goes to a town to later find out it is under the curse of a vampire. Being a mixture of silent films and early sound silents,the film has very little dialogue and uses cue cards to help tell the story. Atmosphere is where this gem shines and it’s one any fan of classic horror films should give a watch.

A horror film found in many cheap horror packs, “Messiah of Evil” is one that’s worth the bargain.

A young woman goes searching for her father – a former artist. She ends up in a seaside town that is governed by a mysterious cult. Like “Vampyr,” this film is heavy on atmosphere. The visuals are really well done. After making this film, husband and wife team Gloria Katz and Willard Huyck would go on to write screen plays for classic films such as “Raiders of the Lost Ark.”

George A. Romero is mostly know for his zombie films, but has several others well worth checking out – including the vampire classic “Martin.”

The film is about a young man who thinks he’s a vampire who goes to live with his insane elderly cousin who believes he’s a result of a family curse.

The film plays on the old-world hysteria that created vampires, but sets them in modern day as well as showcases Romero’s love for social commentary.

You might have heard of this film as one of John Carpenter’s worst -you’ve heard wrong.

The film is about a horror writer who’s writing comes to life and is causing the apocalypse. With a good story, creepy special effects and tons of homage to H.P. Lovecraft this is actually one of Carpenter’s best.

One of the many films Netflix seems to love recommending people, this is one that is well worth watching.

A man speaks to a demon named Lo in order to find the whereabouts of his girlfriend who was captured by demons. Unfortunately Lo has other plans.

The film is a low budget horror comedy – something that comes out a lot nowadays. Unlike the others it doesn’t fall into Troma worship territory and gets pretty emotional at times.

We end this list with a film that’s not only underrated but also influential.

“Spider Baby’s” style is a horror/black comedy fusion (a very rare thing at the time). It is also the first of its kind, inspiring many other crazy family horror films such as “The Texas Chainsaw Massacre” and “The Hills Have Eyes.”

Haig would go on to become a horror icon and Hill would later direct other classics such as “Coffy.” This is not only one of the most underrated horror films of all time but one of the best.