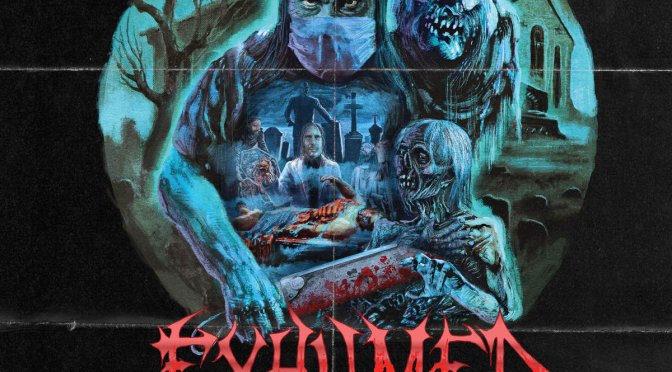 Death metal destuctionista Matt Harvey returns to our show to talk about Exhumed’s new album Death Revenge, plans for his Death-inspired band Gruesome, and much much more.

Things get heavy when we sit down with death metal mastermind Matt Harvey. Harvey talks his bands Gruesome and Exhumed, singing for Exodus and much more in this brutal podcast.

As we continue to open the can of worms that is 2016, there are an abundance of great hard rock/heavy metal concerts waiting in the wings.
Of course there are the big festivals such as Maryland Deathfest and Germany’s Keep it True and Wacken Open Air, but those aren’t always the best shows of the year for each individual person for one reason or another.
Sometimes, it’s the little local shows that make the most impact.
Join us as Bonesaw’s contirubuting writer Anthony Carioscia (Tonythechosen) and Editor in Chief Chris Butera put the final nails in 2015’s coffin by discussing their top five concert experiences of last year.
5: Electric Wizard (4/2/2015) and At The Gates (4/12/2015), Webster Hall, NYC
Anthony: Number five for me would be Electric Wizard at Webster hall. I’ve been wanting to see these guys live since high school and the car ride there was fun. It sucks that I missed the opener but their (Eletric Wizard’s)  performance made it worth going for one band.
Chris: I wanted to go to that so bad. was so bummed to see it sell out so fast

Anthony:  It’s crazy how fast it sold out. I remember when I first got into doom and how no one was into it. How that times changed.

Chris: Doom pretty much became the flavor of the month once Black Sabbath started up again. I remember barely any doom bands around and then all of a sudden you can’t find a show around here without one.

Chris: The D is unofficially for doom at this point. My 5th is also at Webster hall. My number five goes to At the Gates on April 12.

Chris: Yes they were. I got to  see them on their reunion tour in 2008, when we thought it was one and done. Then they came back and put out a new album that I thought was decent, but impossible to live up to Slaughter of the Soul. In my opinion they should have just toured but maybe they were pressured into it and maybe they were jonesing for a new record anyway.  This show was unbelievable knowing what At The Gates can do. I rank it at 5 because I’m not crazy about any of the openers minus Pallbearer.

Anthony: I caught At The Gates at Maryland Deathfest 2014. It was pretty killer. How did Pallbeaer do? I never caught them live.

Chris: They did very well. One of the best shows I’ve been to  this year.

Anthony: I guess my number 4 would be Nuclear Assault at Gramercy theater.

Chris:  Mine as well. If in fact this is Nuclear Assault’s last outing, it was a great send-off in their hometown

Anthony: I think after that one off show on Maryland Deathfest they are done.

Chris: Just the overall atmosphere was great. A bunch of hometown heroes and their friends. You couldn’t ask for a better ending.

Anthony: That was my second time seeing them. Both times they killed it. John Connelly’s voice sounds just as good it did in the 80’s. Having Whiplash open was a good choice too.

Chris: John always sounds awesome. I caught them at their semi-secret reunion in 2010 as well. Whiplash surprised me. I was not sure if they would be that good but they definitely still had their chops. It seems like they got better with age, and they were already good. Murphy’s law was a lot of fun too. Their energy was great and they were funny as hell.

Anthony: I was never a fan of Murphy’s Law but that set was fun as hell to watch.

Chris: They made if feel like a ceremony because they brought their whole crew with them onstage. It felt like a big house party.

Anthony: I guess since this was 4 for both of us. I’ll go with my 3rd choice, 3 would be Napalm Death, Voivod, Exhumed, Iron Regan and Ringworm at the chance theater.

Chris: That sounds ridiculous. I forgot about that tour

Anthony: It was a crazy show both the line up itself and what happened that day. I got to interview Barney (Greenway) in person. Hes a great guy and I was starstruck. He gets extra points for bashing the Chance’s disgusting bathrooms. The best performances were them Exhumed and Iron Reagan. Voivod’s set could have been better and of course a shout out to the local opener Blast Furnace. Those dudes are always awesome.

Chris: The above three are always great. Haven’t seen them in awhile but looking forward to Napalm Death and The Melvins as well as Vektor and Voivod.

Anthony: Voivod were amazing at Maryland Deathfest 2011 and had a much better set. I plan on going to the Napalm Death/Melvins show as well.

Chris: My 3 would be Ghost at Terminal 5 . It was my first time seeing them and was blown away by their presence.

Anthony: They are a lot of fun live. I’ve seen them twice.

Chris: They’re unbelievable. The house was packed and it was the same week the Pope was in town so there was a very ominous vibe in the air.

Anthony: I wonder if that was scheduled on purpose.

Chris: Could be. Also the opener Purson was pretty good too. Their singer/guitarist was a breath of fresh air. She’s got a lot of charisma.

Anthony: Never heard of them. Last time I saw Ghost the opener was King Dude who was cool but didn’t fit the bill at all.

Chris: I heard mixed reactions about King Dude on that show, but their music is pretty decent. Purson is similar to Coven in that female-fronted psychadelic rock (which a lot of people mistake for doom).

Chris: Unfortunately, a lot of people are jumping on that but this one stood out.

Anthony: My 2nd place choice would be the Almighty Maryland Deathfest.

Chris: That would have been my first but I feel like because I didn’t go to it that puts in second for me as well. I have yet to go but i’m clamoring for one.

Anthony: It’s an experience. This was my third time going. This was the only year where I went all four days. I normally skip Thursday.

Chris: It sounds like the raddest party. I feel like the 10,000 Tons of Metal cruise is becoming the semi-mainstream version of this. Which band was your favorite at this year’s Maryland Deathfest?

Anthony: I’d say Agoraphobic Nosebleed had the best performance. Craziest pit ive ever seen. Demilich was a close second though.

Chris: Wasn’t that one of their (Agoraphobic Nosebleed) first shows or something?

Anthony: First official show. Also the Mobb Deep bonus show that was packaged with it was cool to0 though we left when it looked like fights were starting.

Chris: I could see that happening due to a mixed crowd.

Anthony: Yeah more metalheads were watching them than rap fans.

Chris: Groovy. I think our number one is the same band, possibly a different show each,

Anthony: I caught King Diamond on the Abigail tour at the Playstation theater.

Chris: Me too, which night?

Anthony: The 21st, I also caught King Diamond at Mayhem Fest but this show throws it out of the water. Mainly because of King playing all of Abigail and not having to sit through Hellyeah and Devil Wears Prada. Slayer and Jungle Rot ruled though.

Chris: I saw the man himself on the 20th, night two for me.
Mayhem Fest shot themselves in the foot with that lineup.

Anthony: I can’t believe how much he (King Diamond) recovered.

Chris: Me too. I had tickets for King Diamond and Kreator in 2008 – just before he had the back surgery and then the triple bypass so when this was announced I was so psyched because that tour got cancelled for the above reasons. I would up having my friend go down to the venue the day the first night tickets went on sale and he got tickets for the second night about an hour before they were officially announced so it was a sweet score.

Anthony: It was sold out but thanks to Adrenaline PR I was able to get free last minute tickets. I do feel Exodus got screwed over on the tour though.

Chris: Exodus was great as usual, I liked how their merchandise played off of NWA’s imagery. It was nice seeing them with Zetro. How do you think they got screwed?

Anthony: Maybe it was just my show, but when I saw them they didn’t even play for half an hour and had no pit. They were much better when I caught them at the Chance with Testament last  year.

Chris: I felt that their set could have been longer but “Impaler” was awesome to hear. I still can’t believe they played that. They had a decent set for me and their pit was ok. It could have been bigger but the crowds were mostly older fans. There were a few dads and their grown children in attendance.

Anthony: I was so glad King Diamond played “Melissa” and “Come to the Sabbath” back to back, especially since those songs were connected. The fact that they were right before the Abigail part of the set made it seem like a short film before the main one.

Chris: I agree. He also played “Curse of the Pharoahs” for me which was awesome. I just remember that this was the first show in a very long time where I was smiling and legitimately happy the entire time.
Anthony: This might very well be the best live performance Iv’e ever seen.

Chris: It did a lot for me personally. It definitely has earned a spot in the top five of all time.

Chris: The King is King, what more can I say?

Exhumed is a death metal band from San Jose, CA that will sonically tear you to shreds.

Boasting a total of six albums, Exhumed is fronted by vocalist/guitarist Matt Harvey, bassist turned guitarist Bud Burke, Mike Hamilton on drums, and rounding out the bass is a guy named Slime who also fronts the Philadelphia death thrashers known as Coffin Dust.

America’s answer to Carcass, Exhumed was started by Harvey in 1990 and signed to Relapse Records in 1998. Their early work consisted of short, technical grindcore that focused on ridiculously gory lyrics. If you need a visual, check out the cover of their first two albums “Gore Metal” and “Slaughtercult”.

Around the release of their third album, “Anatomy is Destiny;” Exhumed began to shift towards longer groove oriented songs, transitioning further into the realm of death metal – not unlike Carcass had done in their own career.

In 2005, Exhumed released a covers album a la Metallica with “Gabage Daze Re-Regurgitated”.

2011 was a turning point in Exhumed as the band had finally begun to gather some mainstream attention with the release of “All Guts, No Glory,” embarking on tours with Napalm Death, Cannibal Corpse and others. Exhumed then released their sixth and most recent album “Necrocracy” in 2013.

2014 has been an interesting year for Exhumed as they have just wrapped up a tour with Carcass and Florida death metal legends Obituary. They are currently playing select dates with Aborted, Origin and Miasmal on the “Hell Over Europe” tour from November 20-December 20.

In February 2015 Exhumed will be going into the void  on the “Through Space and Grind” tour. Iron Reagan, Black Crown Initiate, Napalm Death and Voivod. Dayglo Abortions, Phobia and Ringworm will be joining them on select dates as special guests.