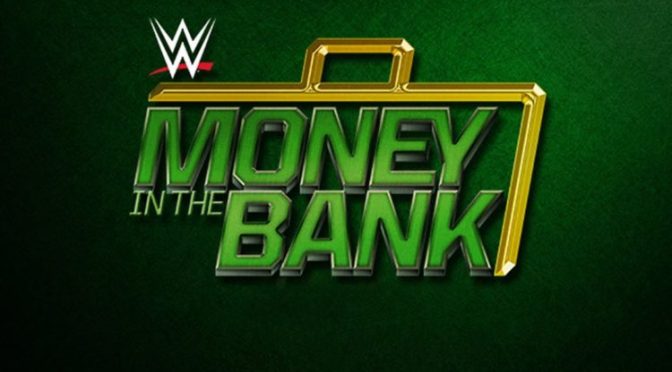 After a welcome month off from PPVs WWE is ready to come storming back with their Money in the Bank event. After a too long Wrestlemania, an curious but unimportant Greatest Royal Rumble, and the disastrous Backlash (WAY TO PUT YA WORST PPV ON MY BIRTHDAY YA JERKS!) the company took a much needed break, but are fans ready for more? The barrage of events left passions drained for the product, and the frustration with WWE may be at a all time high. New Japan threw their Dominion PPV featuring what many are already calling the greatest match of all time in Okada vs Omega IV (The Revenge), which just reinforced the lack of quality the WWE hit fans with lately. Throw in the upcoming G1 Special as well as All In and there is some alternatives to their product WWE cannot ignore anymore. There solution? Make PPV’s even longer and monopolize wrestling fan’s time. Sure we got NXT Takeover: Chicago 2 and the UK Tournament to look forward too, but this is WWE again just steamrolling fans with a massive content overload. It’s hard to care about any WWE event right now considering the hype is elsewhere, and even NXT may be crackling under the weight of this vicious cycle. I’m Spaceman Frank and here are my Money in the Bank 2018 predictions!

The Bludgeon Brothers (C) vs. The Club

The B Boys vs the Good Brothers. A match that should be good, if only they gave us a reason to care. MY BOY Luke Harper and his big ginger friend could be key players on Smackdown, but for the life of me I cannot remember one single thing they have done since Backlash. At least WWE put out this amazing video about Harper that hit me right in the feels. Definitely put more of these out WWE. Meanwhile I have not cared about The Club since last year’s Wrestlemania, and I honestly forgot they were on Smackdown. WHy haven’t they reunited with AJ yet? They could at least tell him to wear a cup. At least Anderson got to show off his abs? The Buldgies win and continue to wait for a chance to get over properly.

Real time footage of the Bobby Lashley right here. They have given him the personality of a overripe cantaloupe, and his ring work has come off as very generic. Zayn has hopped around and tried to bother him like a little brother in the middle of a pixie stick binge, but has that made me want to see these guys wrestle. Absolutely not. What happened to Sami and KO hinting towards a split for like the seventh time? Bob wins to continue to build towards whatever plan they have for him as Sami drinks to forget Lashley’s sisters.

Who to cheer? Who to boo? Will the crowd chant CM Punk during this match despite his embarrassing UFC loss? Those are the questions to define this match. By putting the two controversial men together we potentially have a perfect storm of snark brewing, especially in Chicago. I just cannot see this being anything worth writing home about, but Botchamania will have some quality footage soon. One positive is that I do not think this will be the main event…probably. Reigns wins since we are allegedly getting another match versus Lesnar at Summerslam because we live in the darkest timeline.

Apparently this is still going. DB has thoroughly trashed the big man repeatedly, but now they will up the ante by…having a standard match again. At least WWE has learned to avoid showing Big Cass when his massive cranium covers up the “C” in his name on the Titantron. I do not know why this is going to happen, but to be fair their feud has been watchable for the most part. Charitably I’d even say it has been a top five feud on Smackdown. But not top three. Definitely not top three. It feels nuts that Big Cass would do the job three times in a row, so I will go out on a limb and say that the big man will pick up a surprise/dirty win to give him some sort of rub from wrestling with Bryan.

Two promising young talents clash in what should be a fun little match on what will be a long night. Elias is reaching Miz levels of punchable yet loveable heels, but for the life of me I cannot remember one match of his I have enjoyed. That makes me hope we can actually see what he is capable of facing the IC champ. Meanwhile Seth has been a fine champion, but I still feel like he can do more. He has proven his talent time and again, and I feel like his time to rejoin the main event scene is coming. But instead we will get Roman Reigns with Seth being his cooler younger brother until Evil Dean Ambrose comes back.

Another thing that I guess we shall experience sees Mella face someone who should murder her face. Instead, we may see the return of our lord and savior James Ellsworth help his lady keep her belt. Ellsworth has better merch than 90% of the WWE Roster (exhibit A), so any and all excuses for him to get that paper. Will his return be full time, or more like a Great Khali situation? We shall see. Anyway back to the two ladies in this match! Asuka is still Asuka and should be champion, but it seems like rumors are swirling Carmella is keeping the belt, so with all the gossip pointing to her returning Carmella manages to sneak in a victory. Followed by Asuka literally kicking someone so hard they explode.

There is plenty of ways this match can go. Nia Jax has wasted a heel turn so soon after trying to be a role model, which is probably the biggest tragedy of this whole thing. Jax deserves a real run as a face, but instead she proved Alexa Bliss right by being a bully. Ronda meanwhile is not ready to carry the belt, but that does not mean she will lose her. My prediction: Ronda wins the belt followed by some shenanigans (more on that later).

These two meet for (possibly) the last time and may actually be the match we have been waiting months to watch. This whole feud has been rather deflating, so these two better have a barn burner to make up for all the dick kicks. Shinsuke should have probably won the championship now after all the drama, and if he does not win here he never will. AJ Styles is still one of the top wrestlers in the world, but if this was their plan to have two workhorses draw this fued out i’ll eat a hat full of mustard. I feel like every time I think Shinsuke is going to win he ends up failing me, but now, truly, finally, it is the time to crown a new champ. Shinsuke wins probably…right? RIGHT?!

Ember Moon vs. Charlotte Flair vs. Alexa Bliss vs. Becky Lynch vs. Natalya vs. Lana vs. Naomi vs. Sasha Banks (Women’s Money in the Bank Ladder Match)

Time for some lists! Here are the rankings from least to most likely to win the Women’s Briefcase.

Braun Strowman vs. Samoa Joe vs. The Miz vs. Finn Balor vs. Bobby Roode vs. Kevin Owens vs. Rusev vs. A New Day Member (Ladder Match for Men’s Money in the Bank Briefcase)