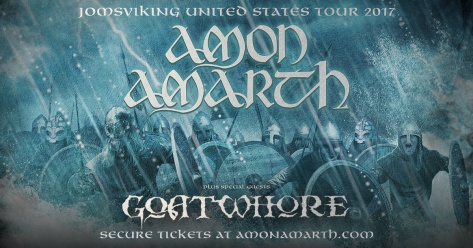 Although In Flames and Katakylsm were playing The Chance in Poughkeepsie, I had no interest. I don’t care for Katakylsm, plus I had a good feeling In Flames wasn’t going to play anything before Clayman (I’d later find out I was right).

Instead, my friend Don and I decided to go see Amon Amarth and Goatwhore for a much better show at The Paramount in Huntington, Long Island. Upon getting there we realized it was a pretty nice place and hung out at a bar for a bit before going inside. Once inside, we spoke with some cool Long Island metalheads until it was time for Goatwhore to get on stage.

Though we’ve both seen Goatwhore so many times (this was my sixth to be exact), they never get old live. The last time I saw them was 3 years ago, so you could say it had been awhile. The energy of their performance was insane and it was cool to see them play for a bigger crowd. We also got to hear all kinds of classics such as “Baring Teeth for Revolt” and “Apocalyptic Havoc.”

After Goatwhore finished, it was time for the band I was most excited about. Back in High School, Amon Amarth was one of the first death metal bands I had ever listened to and I still consider their early material through 2008 to be top-notch melodeath (the stuff after…not so much).

Their set tonight had a lot of newer songs and although I’m not a fan of that era, their performance on those tracks was great. Amon Amarth also played many great old-school tracks, including “Death in Fire,” “Twilight of the Thunder God,” “Pursuit of Vikings” and my all time favorite “Cry of the Black Birds.”

Out of the 2017 shows I’ve been to so far, this one was my favorite. Both bands had tons of energy and because the show only consisted of two great bands rather than an endurance test with four or more good and bad ones.