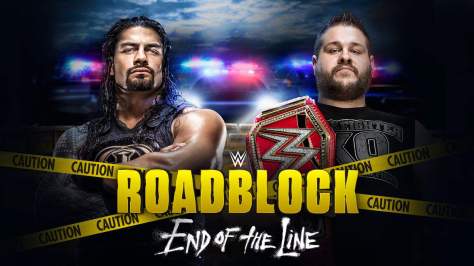 Roadblock: End of the Line may not be the best PPV of 2016, but it will be the last one, so at least it has that going for it. In a year where the WWE saturated their network with live events, Roadblock pretty much sums up what to expect: pretty good, but expect maybe half a storyline to advance forward. Hell, they even already had a Roadblock earlier this year, which granted was not a full blown PPV but at least it was on a Saturday so people could get properly schwifty during it.  Despite having a loaded roster and three hours of weekly television, Raw simply cannot get me to care about the live events. Sure i’ll watch, but at this point I am down to watching the top ten moments from Raw on YouTube rather than the full show or even the 90 minute Hulu version of Raw. I’m Spaceman Frank, and here are my predictions for Roadblock: End of the Line.

This match is what I assume will be the preshow match, unless WWE screws with me and adds another match to the PPV after I write this. Rusev is fighting for his wife Lana’s honor, and Big Cass is fighting for his BFF Enzo’s honor (Aww, they really do love each other!). It is hard to feel bad for Enzo here, as he did try to sleep with another man’s wife. Typical WWE babyface booking reminiscent of Roman Reigns during his feud with Rusev. After watching Rusev on Total Divas I have a massive man-crush on the Bulgarian Brute, so I hope he wins and get an actual victory on PPV. Rusev crushes Big Cass as I swoon in my chair.

Strowman gets his first real competition (Sin Cara does not count) and Zayn gets a match he can actually win since his fight forever feud with Kevin Owens. Zayn has been drifting around for months, and Strowman has been directionless between snuffing out the life from various jobbers. Adding the time limit means this will be the deciding factor here. Is it too early to give Strowman a loss here, even with the technicality? Probably. I see this ending much like Zayn’s NXT title match with Owens: Strowman gets the TKO victory here just as the time limit is closing in and makes kids cry as Zayn gets pummeled into oblivion.

With The New Day officially the longest reigning tag team in history, now the possibility that they lose is much more real. However, at this point I am fine if WWE wants them to pursue the longest combined days as champ or have Kofi try to become the person with the most combined days as a tag team champ. This changes things up a little bit, and in particular trying to keep the titles so Kofi can make history is an interesting twist that would justify their cheating ways. After all, the guy deserves something right? Cesaro and Sheamus are getting better, but Raw needs depth in the tag team scene asap. Maybe focus on the other teams stepping up their game while The New Day take a backseat and brainstorm on how to keep their gimmicks fresh. The New Day retain since them losing immediately after getting the record would be pretty lame and predictable.

Normally I do not like multi-man Cruiserweight matches, since they give WWE an excuse not to build up the  individuals in the division. However since these are three out of the four guys with actual developed characters in the Cruiserweight division (with the other man being the excellent Jack Gallagher, more of him please!), I’ll let it pass. Swann is the type of feel good story that works well in WWE, and it has been told much better than when WWE tried the same thing with TJP. Meanwhile Kendrick just keeps floating around the scene as the only guy in the division that can cut a promo, so at least he has that going for him. I really hope we see some balls out action during this match, as it is about time WWE lets these guys go all out now that we have had several months of main roster cruiserweights. Swann retains until No Way Jose is ready for the main roster and the duo become the new HBK and Diesel…or Jerry Lawler and Isaac Yankem.

This match should feel like a big deal…but it does not. It is no secret Jericho is coming after the title, and really Seth should be too since he is too good just to fart around in the background. Until Rollins finds his babyface center of gravity he needs to pursue the title since WWE has given us little reason to cheer for him as a good guy. A number one contenders stipulation would have been nice here and add a little extra stakes to this lame duck side feud to the main event. How did Reigns sneak into the main event picture anyway? Who demanded this match (who does not have the last name McMahon)? Should have been a three way dance for the title. Anywho, Jericho gets the win either by sneaking out a victory or Owens helps him win to help repair their relationship.

This will probably be the best pure wrestling match on the card, as Banks has proven she can work the long match and Charlotte can probably go super saiyan if she yells long enough or watches Krillin die. This promises to be the end of the feud, which has been a long time coming. Charlotte is undefeated on PPV, but since the WWE has not made a big deal about this until recently I do not think they will have Charlotte win back the belt just to keep the streak alive. Rather, I see Banks keeping the belt. She needs to have a PPV win at some point, and just switching back the belt to Charlotte yet again would be pretty weak at this point. With the stipulation you can have Charlotte get a couple pinfalls and look strong but have Sasha have her own Bayley moment and beat a submission out of Charlotte as time expires.

Again, why is Roman Reigns in this match? Shouldn’t he be ruining some up and comer’s career by squashing him for several months? It seems like every time WWE does not have a hot feud for a heel they throw in Reigns, which is exactly why the fans have turned on him as they have. Instead of letting him work with people on a midcard level we get to see him jerk his fist off and delay the inevitable Jericho/Owens match. In addition, Reigns is still the cocky jock he has always been, and his character is even more insufferable because of it (I expect him to show up in his letterman jacket and talk about how his dad owns a dealership any week now). Owens wins because I refuse to believe 2016 will hit true rock bottom with Reigns being double champion.