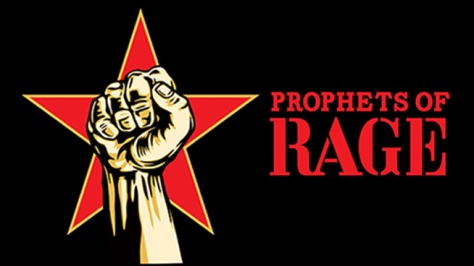 When I heard about a new supergroup containing all the instrumentalists of rap/rock band Rage Against the Machine along with Public Enemy’s Chuck D and Cypress Hill’s B-Real, I knew I had to catch this.

Public Enemy and Cypress Hill (well, old Cypress Hill) and Rage were one of the few times rap and rock music mixed well.  Due to the low prices, my friend Doug and I bought tickets to the Prophets of Rage show at the Barclays Center in Brooklyn, NY. Since we both had the day off, we spent time in Coney Island. I had never been here before and I ended up enjoying the areas beautiful yet retro look (I also got to try frog legs for the first time!).  After hopping on the train, we got to the Barclays Center around 7pm just in time to catch the first band.

First on was Tim Commerford from Rage Against the Machine’s side project. We were curious to see how Commerford would fair in another band, and after viewing them…let’s just say we felt Tim should stick to Rage as Commerford was pretty…well, whack. The band played some kind of nu-metal influenced punk. While the bass riffs were cool, Tim’s vocals sounded too whiny and had cringe-worthy lyrics like, “Fuck with me and I’ll kill you all.”

Prophet’s of Rage set started with DJ Lord of Public Enemy opening the set by sampling many rock and hip hop hits. The crowd went really wild when he chopped and screwed the Nirvana classic “Smells Like Teen Spirit.”

Prophets then got on stage with a cover of “No Sleep Till Brooklyn” that infused lyrics from the Public Enemy hit ” Fight the Power.” They then went on to play a string of Public Enemy and Rage classics with the one Cypress Hill song, “How I could just kill a man” thrown in for good measure. The Rage members then got off stage and B-Real and Chuck D went into the audience. They then went back and forth performing classics from Cypress Hill and Public Enemy such as “Insane in the Brain” and “Welcome to the Terrordome.”

This got the audience screaming along to the songs. D and B-Real then went back on stage and played more Rage and Public Enemy songs, including a remake of “She Watch Channel Zero” using the riff from “Cochise” by Audioslave. They also threw in a cover of Bruce Springsteen’s”Ghost of Tom Joad.” Unlike Rage’s original cover of this song, Tom Morello sang on it with Aaron Bruno from AWOLNATION joining in. Prophets ended the set with “Killing in the Name.”

We then left for Montgomery, NY after witnessing one of the best shows of the year. The two of us  later would write an editorial of the five greatest highlights from this show for Alternative Nation.  Read this if you want to hear about Prophets of Rage’s set in more detail.