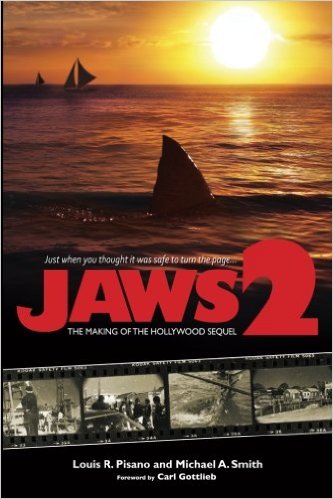 In 1975 the cinematic world of Hollywood changed forever.

A then-unknown Steven Speilberg would direct a horror film by the name of “Jaws” that unexpectedly brought in a record number of ticket sales; thus creating the first-ever summer blockbuster.  Due to its huge success, the studio decided to make a sequel simply titled “Jaws 2.” Released 38 years ago today, Jaws 2 naturally was a big success thanks to the original. Though still a well-liked film, people tend to forget how important it actually was to the film industry as Jaws 2 set the template for not only horror franchises but franchise films altogether.

This importance was not forgotten by two devoted fans named Louis R. Pisano and Michael A. Smith when they wrote a book titled “Jaws 2: The Making of the Hollywood Sequel.” Released last September by BearManor Media, the project took five years to complete and contains interviews with just about every Jaws 2 cast member one could imagine. The book also talks about the original plans for the film and how Jaws 2 is the most important sequel in cinematic history. In this exclusive interview, Pisano shares how his and Smith’s vision came to life for this book that all Jaws and movie fans alike should dive into.

The Bonesaw: What made you decide to write “Jaws 2: the Making of the Hollywood Sequel?”

Pisano: We decided to write this book because “Jaws 2” is a much maligned film that really doesn’t deserve to be. The film is clearly a competent and entertaining follow up to what was at that time the biggest film ever, “Jaws.” However, sequels were a foreign concept in film in 1977/1978. They weren’t  a mainstream trend in motion pictures as they eventually became after the success of Jaws 2. Jaws 2 also left a historic mark on the motion picture industry much in the way the original did. The film’s teaser poster art featured the “All New” text which also appeared on future film sequel posters such as “Halloween II.” The film’s tagline “Just when you thought it was safe to go back in the water…” also became famous, often closely imitated in many later films and has even become a synonym of sorts used in language when a circumstance leads you to believe something counter-intuitive.

Much in the way that the original created the summer blockbuster as a form of Hollywood business and left its mark on pop culture, Jaws 2 essentially created the notion of a film sequel as another new Hollywood business. In fact, the word “blockbuster” itself was born because of Jaws (referring to the massive ticket lines that stretched for several city blocks). Jaws 2 started the sequel as a movie business which is now almost the norm. Dozens of sequels are released every year now in cinemas as standard fare – not the case in any way back in 1978.

We felt that Jaws 2 – because it follows in the shadows of the near-perfect original, has been unfairly underappreciated for the wrong reasons. We wanted to present the fact that Jaws 2 had just as significant of an impact on the Hollywood movie business as the original.

The Bonesaw: How were you able to contact all these cast members for interviews?

Pisano: The embryonic stages of acquiring contact with all of the contributors to the book happened when I was seeking out autographs from the entire cast of Jaws 2 for my personal collection. Over the course of a couple years I eventually found all the “Amity Kids.” I reintroduced many of them to each other and from there it pretty much snowballed. They all even got together for a cast reunion in California a few years back.

My co-author Michael A. Smith had also been heavily involved in film research for years for his Mediamikes website and had many, many important connections in his network that were invaluable to the book in terms of securing interviews. Also as we were working on the book and news of its release spread on the internet, we were fortunate enough to actually have some of the contributors contact us out of the blue. We were very lucky that all of these things led to us finding every living cast or crew member to participate in the book.

Bonesaw: What was your first experience with Jaws 2? What do you like most about it?

Pisano: My first experience with Jaws 2 was seeing the Lou Feck novel cover. Having already been fascinated by Roger Kastel’s masterpiece original Jaws image of the Benchley novel, the Feck Jaws 2 image was eye candy to me. Then of course, I saw the actual film in the cinema. I remember the audience reactions and the screams. The movie scared me enough, but the screams added to that fright and from there it became a cherished memory and created my love for this underrated and gutsy film.

Bonesaw: Have you ever watched any of the old Jaws rip-offs? If so, which one’s your favorite?

Pisano: Funny question because my good friend John Campopiano is a huge Jaws rip-off fan! He holds an annual gathering among all of us local Jaws fans called “Rip-Off Fest,” so I’ve had the privilege of seeing many, many Jaws rip-offs over the years thanks to him.

However, my favorite one has to be the infamous “Great White” (also called “The Last Shark”). The reason? When I saw the ads on T.V. as a kid, I thought, “it might be Jaws 3!” So for the nostalgia of that film and the fact that it did very closely resemble Jaws – even outright robbing actual scenes from Jaws and Jaws 2! For all it’s awful glory, Great White is my favorite Jaws rip-off film.

You can purchase “Jaws 2: The Making of the Hollywood Sequel” from Amazon, BearManor Media and where other books are sold.