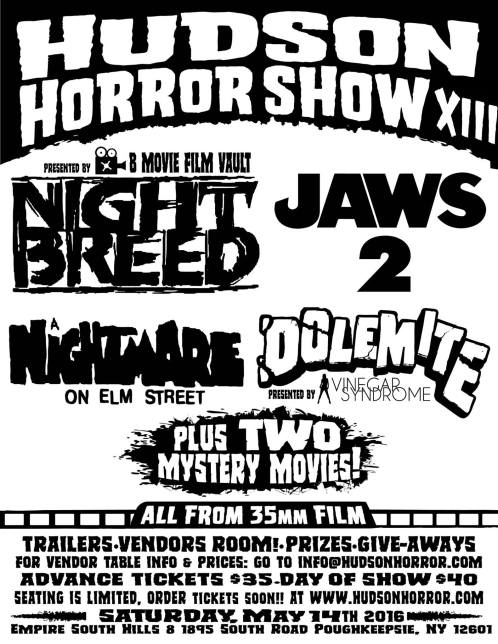 After really enjoying the last showing 6 months ago, I knew I had to come I’d come back.

The lineup for the film festival consisted of “Dolomite,” “A Nightmare on Elm Street,” “Jaws 2,” “Nightbreed” and two mystery films.

Like last time, there were vendors with a myriad of horror DVDs, Blu-Rays, VHS tapes, t-shirts and signs. This time however, the Hudson Horror Show vendors had a larger variety of other items including comics and vinyl. The film festival also had exhibits such a model shark from Jaws that you could get pictures with.

I met up with some friends and purchased DVD copies of the films “Slaughterhouse” and “555” as well as a Blu-Ray of “Corruption” (which comes with the exploitation classic “Last House on Dead End Street!”). At around 12:15 p.m.  the mystery movie played. While I can’t reveal what it was I will say it was very enjoyable crap. After that came an intermission and then the first of the revealed films.

“Dolomite” is an iconic blaxplotation film (and one of the best). Starring stand-up comedian Rudy Ray Moore, the film is about a pimp named Dolomite who is let out of prison and hired to catch a bunch of notorious criminals. The film is very sleazy and humorous with the word “motherfucker” being said in every other scene. A good place to start for those looking into the blaxplotation genre along with “Shaft” and “Coffy.”

A Nightmare on Elm Street

The next feature was this well-known horror flick. For the two people that don’t know, the film is about a killer named Freddy Kreuger (played by fellow horror icon Robert Englund). Unlike your average serial killer, Kreuger is a demonic spirit that haunts people’s dreams. If he kills you in your dream, you die in real life. While trying to stop this from happening, the main protagonist Nancy finds out more about Krueger and his connection to the parents of her and her friends.

“A Nightmare on Elm Street” is a horror classic. Kreuger’s mix of sadistic insanity and silly one-liners made the character a horror behemoth and England a legend to this day. Then-unknown Johnny Depp’s death scene remains a staple to the franchise and help project his career into the stratosphere. While I’d already seen the film several times it was nice to watch it again as it had been awhile.

The following film was “Jaws 2” – a film with as much notoriety as the previous one.

Before the movie started a man by the name of Louis Pisano gave a short lecture on his book “Jaws 2: The making of a Hollywood Sequel.” The book is about pretty much everything there is to talk about in “Jaws 2” and how it was the first Hollywood sequel.

While not as good as the first, “Jaws 2” is still great. The film is pretty much just a direct follow up that tried to one-up the original in every way. Any fan of the first film would most likely enjoy this one as well.

After this film I started to head out. As much as I love “Nightbreed” and was curious to see what the last mystery film was, I was getting tired and it was getting late. On the way out I ran into Pisano and ordered his book off him (which I eventually plan to review) but that is something for another time.