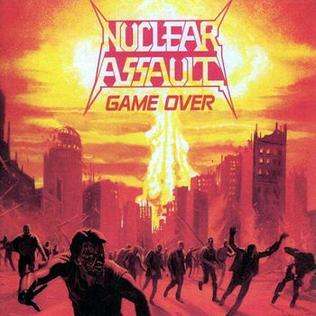 Thrash legends Nuclear Assault have embarked on their final tour (dubbed as the “Final Assault” tour) which will commence with a one-off appearance at next year’s Maryland Death Fest where they will finally hang it up for good.

Last Saturday, the band played an awesome show to a packed hometown crowd with friends Murphy’s Law and Whiplash at New York City’s Gramercy Theater; which I was fortunate enough to have attended.

I had taken the day off from work for a local show in my area when the date of that show got moved. I figured I’d tag along with my friend Jay to go to this awesome looking show instead. We took the train to New York City, got slices of dollar pizza, then took the subway and walked to the Gramercy Theater. Once inside, I ran into some buddies of mine and we caught up until the show started.

Up first were thrash legends Whiplash. I was not too familiar with them outside of their 1986 debut “Power and Pain,” but my friends were excited to see them. The band was fucking killer. They had incredible incredible energy and sounded great.

Next up was the hardcore punk band Murphy’s Law. While I am a big fan of 80’s hardcore, this band was never one I could get into. The band played a very long set and had a lot of energy. After watching them for a few minutes, I went down to the lower part of the venue to look at merch. Jay and I would then meet Tony Potaro, the vocalist and guitarist for Whiplash and get a picture.

After Murphy’s Law finished it was time for Nuclear Assault.

I had seen them once four years ago at MDF 2011. While this fest had other greats like Voivod, Ghost, Acid Witch, Nunslaughter,and Exhumed; Nuclear Assault owned – and here they were no different. The band delivered classics such as “Brainwashed,” ”Hang the Pope” and “Critical Mass.”

Bassist Danny Liker is a legend. I’m also a fan of his other bands Brutal Truth, S.O.D and his time in Anthrax. S.O.D is scheduled to play the Black and Blue Bowl in Brooklyn next year and I will make sure I go.