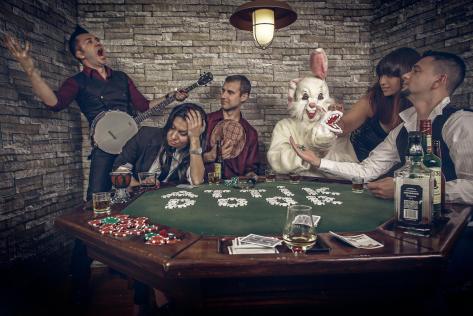 Their sound is easily described as a Mad Scientist’s concoction of awesome alternative rock. Part DeVinyls, with some Disturbed, a nice-sized chunk of No Doubt and a side of Fly Leaf, as well as some Red Hot Chili Peppers, Attik Door have a sound that changes from song to song, but it’s always catchy. There’s not a bad song on the album, even if they share a consistent theme of borrowing things from more established bands. But in their defense, not many bands can emulate the elements of such a wide array of talent.

Because of that, Attik Door will immediately catch your ears.

There’s no way around it- lead vocalist Liana Tovmasyan is a treat. It would be easy to call her a younger sounding Gwen Stefani, but she’s so much more. With the accent appearing in some of her work and her pure grit, she’s not the cute punker Stefani is. She’s the type of rocker that’ll outdrink you and slap you in the face before winning you back over with her smile. Ballsy, but smooth, she’s got a ton of depth and heart. In every song she brings something different to the table, from “California,” where she sounds like the new female voice of RHCP, to “The Front,” which could easily be a track on No Doubt’s “Tragic Kingdom.” “Cosmos” is another song that’ll sound familiar, as the opening guitar riff is super similar to Flyleaf’s “All Around Me,” but with a more Stefani-esque vocalization, it has a unique feel to it.

By the end of the album, it’s apparent that Toymasyan is super versatile. She can rap rock, she can wail, she can tantalize like a siren off the Greek Coast. She’s a star in the making.

It also helps that she has a wonderful backing band behind her. Obviously a bar/cover band at one point in their careers, guitarists Alex Shrayber and Tim Shulepov have a polish that defines each song. They’re are definitely the types of guys that grew up on mid-late ‘90s alternative and metal. Their seamless play just screams it. The same goes for bassist and Margarita Grabarova and drummer Igor Boyko, who possess the speed and skill to make a song extra ballsy or groovy. On “Bleed,” the drum and bass work maintains such a consistent speed throughout that you can’t deny their skill. Driving the song from start to finish, you’ll want to put the bass boost up so you can hear it even closer.

At the same time, the familiarity sounds the band consistently experiments with comes with a caveat. The riffs and vocals work off of established and successful tones and sounds. They don’t stretch the medium and as a result, you can say that Attik Door aren’t challenging themselves to create something as new as they could. Rather than redefine, they are masters of the rehash. However, Lady Gaga has made millions of dollars doing the same thin with pop music, so what’s wrong with Attik Door doing the same thing?

You can also read Patrick Hickey Jr.’s review here and more at Reviewfix.com.