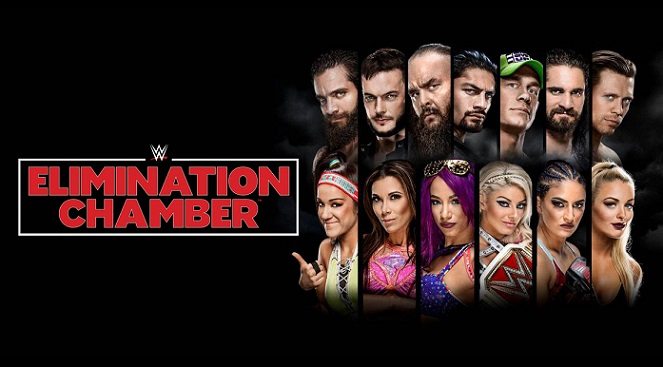 The Elimination Chamber! The massive thing shows up every February and pretends to be super important but in reality, we all know what is going to happen already.

The Elimination Chamber is the Puxatony Phil. Yeah, Phil, we are stupid we know spring is coming eventually along with Roman Reigns’ WrestleMania push (You ain’t special, ya just a rodent)!

Tangent aside I do not expect much fireworks at this event or Fastlane, but it is easier to watch than tens of hours of Raw and Smackdown.

Considering until Friday there were only four matches announced shows just how little effs WWE gives about this Pay-Per-View. The only thing they seem to care about is Rhonda signing a paper and MAKING WOMEN’S HISTORY BUH GAWD. I’m Spaceman Frank and these are my Elimination Chamber 2018 predictions.

The Club vs. The Miztourage (Pre-show Thing That Gives You A Chance to Stop Listening to Booker T for a Bit)

Is it possible both teams manage to job out to each other during this match? A match featuring the popular members of both teams could be cool, but will WWE really go along with Miz vs Balor? Or will they decide come Wrestlemania time to just throw all these dudes together for another preshow brawl?

Time will tell, and I predict The Club will win since I would be shocked if Axel and Bo are employed by WWE by the end of the year.

Hey, Remember when this was a lowlight of Raw 25?! Well, now you get to experience it again! Until they pull out the shenanigans at The Hardy (or Wyatt), I have zero effs to give. I just enjoy that Hardy is officially labeled as “Woken Matt Hardy” on Elimination Chamber’s Wikipedia page.

Remember when Wyatt won the WWE Championship at last year’s version of the event? Pour one out for our lost internet darling. Matt Hardy has lost tons of momentum since his Woken videos started airing, and Bray has zero momentum, so Hardy wins.

Can I confess something? I am a big fan of all the members of Titus Worldwide.

I just wish this group actually did something worth investing in. Like, they have won a whole bunch lately, but it has all felt like a giant fluke. I do not consider them much of a threat to a team on the level of Breezango, let alone The Bar. Speaking of The Bar, is Sheamus actually hurt? I keep expecting him to go on the shelf because of his alleged neck injury, but here he is still putting on fantastic matches with his Swiss buddy.

As much as I enjoy The Bar, if he is really closing in on retirement I hope it means Cesaro gets a chance to be a singles star finally. The Bar win so they can begin the Irish Wake for Big Shamo’s career.

If Nia wins, then she will be involved in Raw’s women’s championship match at WrestleMania…so she will lose.

Look, I love Jax but she has lost every big match she has ever been in. Why would she start winning when it matters? Oh, wait they did that last year with Bray Wyatt….

Anyway, Asuka losing before ‘Mania would make about as much sense as knitting berets for a pack of wolves. Hell, Asuka losing during Mania makes very little sense, Rousey or no. She needs the championship first, and with several women’s matches potentially lined up for the event, I feel like a five-minute Asuka squash is in order. Asuka wins and Jax goes off to promote Total Divas.

HISTORY AND SUCH! Once again WWE has pulled that trope out of the hat, and at this point, it is the only one left for them to use.

As for the participants, it is a mixed bag here. Sonya Deville and Mandy Rose are here as fodder, though if they split up I would be mildly curious to see how they far by themselves. Mickie James is another body here to make people look good, but the veteran should be able to pin one or two people before going out. Bayley and Sasha Banks are the potential show-stealing pair here, and if we get true Boss Banks out of the chamber then I will be happy.

Meanwhile, I can 100% see Alexa Bliss sneaking out with the belt for the Asuka squash, much like how she got wrecked in five minutes at last Wrestlemania.

Look, we all know what is going to happen. The rumors have been in place for a real. It is transparently obvious every time the fans real favorites (and future mayor Kane) get taken down by Brock Lesnar with one F-5. Meanwhile, Roman Reigns has been off in the shadows losing to a surprising amount of people, yet nobody is convinced he is suddenly vulnerable.

The Roman rehab tour has yielded some decent matches, but honestly, he is the fifth most over guy in this match at best. At worst he is facing six guys who have managed to get over with the crowd through different combinations of pristine wrestling chops and character work that does not feel like an old, out of touch man wrote it for him.

Roman is going to win, we all have accepted it in our hearts, and we just have to hope the other men in the chamber have something interesting to do at Reign’s “fourth time’s the charmaMania.”